My first version of this blog post was to pit PAX West, my favorite conference, versus the simultaneous Burning Man Festival, which I’ve been curious about but unable to attend. Yet this seems distasteful to me now that there has been a suicide there. I have no desire to take down Burning Man, to kick them when they’re down. Indeed the more I read, the more I respect it.

Pax and Burning Man have more in common than I expected and both transcend their surface appeal of video games and sex, respectively. What makes them so special?

First, some facts:. They are growing, each drawing over 70k people (of course, PAX does this three times a year).  PAX West occurs on Labor Day weekend with ‘Man, and both are on the West Coast. They involve the option of dressing up (or down), and both have music tightly integrated into the experience. What is it about these two events that makes them so helpful or valuable to so many? I’ve found five items…there are probably more. 1. SELF-EXPRESSION  – There are many installations at Burning Man that are simply astounding, like here, and here. People will paint everything so careful what you search on there, bub. PAX has fantastic costumes as well, encouraging attendees to Cosplay, costume play, as their favorite characters from the entertainment world, like here and here. Astounding effort goes into both, and it’d be tempting to think that Burning Man, with its enormity, would have the market cornered on this one. The Gentle Reader must understand that video games are a form of expression. Both attendees and vendors are in a symbiotic dance of creation and fandom, amplifying one another ad infinitum. Finally, video games are literally creating new worlds and experiences, sans drugs. During this PAX, I wore the Oculus system and became the Hulk.  It was weird and wonderful and transported me to another place, without going to a desert.  This was my new world, with my huge arms –

Check out a review of that experience here – but TL;DR – it was amazing.

At the end of the day, both PAX and Burning Man are tornados of creation and both are bound by time. Like the smoldering remains of over 30 burns in the desert, video games and their millions of lines of code are like sandcastles, cast into the trash bin the next time a great graphics engine comes out.   – – – Lesson 1: Create something new, experience something new, and then let it go

2. ENTERTAINMENT- Every video game and board game in existence show up at PAX, with Twitch and YouTube live vying for interviews and streaming games. Those in for quieter fare go to the dozens of board game areas, console play areas, PC play areas, vintage video game areas, or…pausing for effect..go to a panel of video game experts to learn how to participate. Burning Man has a program full of events, and, like PAX, you feel almost feel more FOMO for going than not, since you become aware of what you’re missing out.  I got more steps during PAX than I did at the Seattle Rock and Roll 1/2 marathon. Fun can be exhausting.         – – – Lesson 2: Have fun, Let Go, and pace yourself. 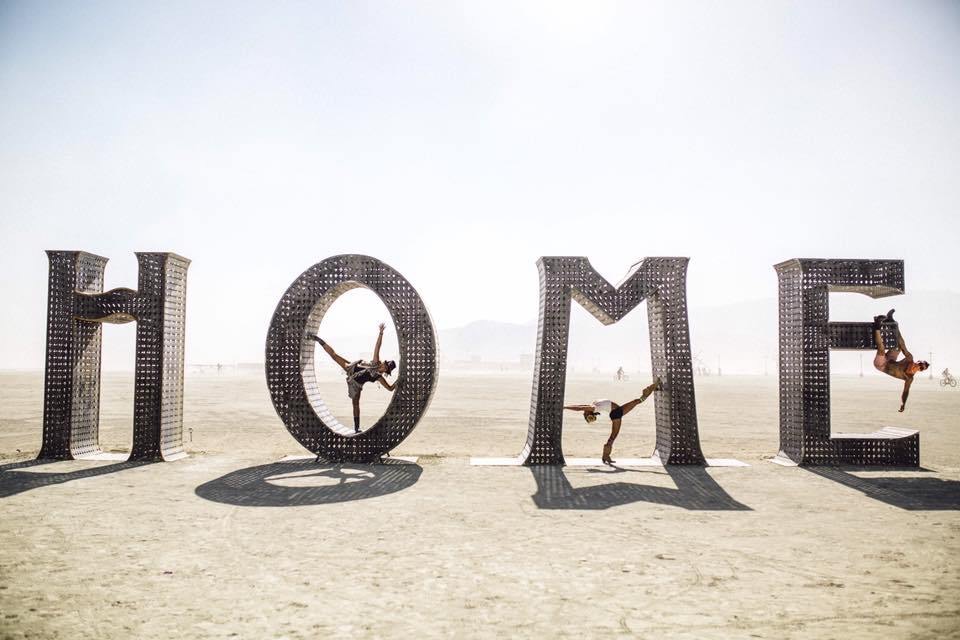 3. SENSE OF HOME:  On the binding of the PAX conference guide the term – “Welcome Home” appears.  This term comes up again, but in a welcome at Burning Man: “When I told people that it was my first Burn, many of them said, “‘welcome home'”.  Even a conservative got a warm welcome, which is as fantastical as any outfit at either event. It goes without saying that at both conferences there’s plenty of geek and nerds. A good chunk of both populations were in the AV Club, Computer Club, chess club, or played Dungeons and Dragons. I’d gamble many of them had a heck of a time surviving the Darwinian grinder we call school. I know I did. These folks are survivors. They are creating, building, working, and showing their stuff for all to see (in more way than one). They’re creatives, through and through, and have brought their uniqueness home, a home that they too created.  – – –  Lesson 3: Find and make your home

4. VALUE:  Both of these events cost a TON of money. PAX tickets are spendy, but not nearly as spendy as the ‘Man, who will run you over $400 just to get your vehicle in. People work hard to build a city for a week with no resources and then leave zero footprint on the place. I agree with the aforementioned conservative- he wishes all cities were run with Burning Man principles shown below. In PAX, people are constantly giving you merch, discounts on computer gear, hats, and mouse pads, but like going to Costco, it’s hard to leave without dropping several hundred bucks before you know it.   – – – Lesson 4: Save your money and spend it where it counts most

5. SELF-DISCOVERY: Being with strangers, completely dependent on their generosity, and facing a week without electronics and connection to the world seeps of self-discovery. Burning Man has the temple, where you put names of loved ones you’ve lost, messages you want to send to them or to the world.  This whole thing is built around self-discovery and I would go just for that one reason. Now, PAX is a bit more of a stretch. There is little quiet, since the days are packed with people and activities. And yet there are many moments in the five years I’ve attended PAX where I wondered about the future. Where is all of this going? How do I, as a techie and story teller, work in this new medium? What ethical/moral challenges does this new age present to society? How will VR change the world? You have to make time for the self-discovery or it won’t happen, even in a desert.   – – – Lesson 5: Make the time and space for self-discovery

WRAP-UP –   Nearly 200,000 people go to these two events combined, celebrating life, who they are, and what they’ve created, together. What works for them should work for you.

The point – By saving your time and money to seek out self-expression and a sense of home, mixed with some fun and self-discovery, you are sure to find strength for the real world, giving yourself fuel for expression and engagement.

What is your PAX? What is your Burning Man? What is that thing that you do to challenge yourself, revive, and reinspire?