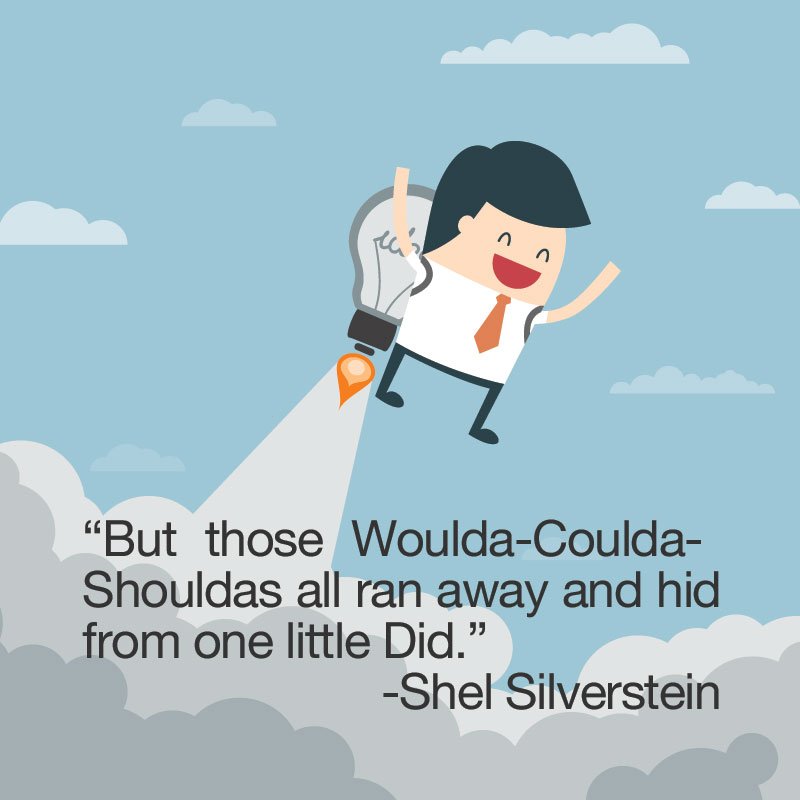 Happy Week 11 folks!  Quick quiz!  How many of these statements have you thought or said this year?

I can say confidently I’ve thought at least five of these this year, if not this morning.  You might have guessed  it by now – the most dangerous word in the English language is should.

Why should? I first was alerted to the dangers of this word by my wonderful life coach Diane Gasal, who I’ve mentioned before on this blog. When she said it, I thought to myself that it was some woo-woo soft-skills coaching thing that was either silly or beyond me. Slowly, my sensitivity to the word has grown.

I mean, there’s this silly “Shoulda, woulda, coulda” thing from my childhood, a small rhyme that those who were tired of you complaining about stuff would chant at you when you used one of the terms, but beyond that, the concept seemed mundane. In the context with Diane, I was complaining a lot about a particular manager I was working with and the general state of my career. With the patience of a saint, she’d listen to me blather on about my the charred remains of a once promising career.  After a few sessions of this, she started to interrupt my weepings when I would say things like “I should be able to do my work without Manager X over my shoulder…”  Diane would counter with something like, “Should is a word we need to be careful with. Try to remove it from your story.”

As I pondered this concept, and hearing on the tongues of others around me, I realized that should implies a judgement. You can often say it with a righteous indignation.

Regardless if those judgement are incorrect or correct, the effect it has a negative effect on your psyche, especially when you can’t change it. Should looks backward, into an immutable past. Should removes your power and can damage the imagination and stifle re-framing. After much internal work I became conscious of the using the word and it has helped.

Fast forward a few years. As I drove into work I was stuck in the perennially horrendous Seattle area traffic (which should be better!)  I came upon Phuc Tran’s TED talk (NPR Podcast) on the dark side of the subjunctive.  To review, a subjunctive is a form of sentences that do not describe known objective facts, versus the indicative, which is all facts.  “I am writing this blog” is indicative.  “My typing skills should be better” is subjunctive.

Phuc says there is no subjunctive in his family’s native language of Vietnamese.  Some debate rages in the comments about the validity of some of Phuc’s claims, but I do not want to make this an English lesson. Watch the video, and see if you can grasp the concept.  I trust the spirit of what this guy is saying regardless of the technical details of the language.

As you heard from Phuc, the subjunctive allows us to both see into the future, and imagine great things, or look into the past, and make our hearts ache with what could have been. What should have been. According to Phuc, Vietnamese does not have a subjunctive. The opposite of the subjunctive is the indicative, a perspective of what is, not what should be, is shared. His parents lived in the indicative which provide them with an incredible resilience because they “didn’t expend psychic energy on what could have been.”

We worry about what we should have been almost at any age.  At twenty we’re worried about if we chose the wrong college, should have done better in high school, should have lifted more weights, should have played better, gotten different friends.  At thirty and forty, its the career, which is a never-ending quagmire of should-haves and would-haves. This is mostly due to the complexity of the environment. Very little is directly under your control in life, but we compare to ideals, rumors, and facades of others we know. I realized that the habit to indulge in Shouldism will grow as a person ages. When more of your life is in the past, it becomes evermore tempting to review it with a powerless imagination of “what would have happened if I did that differently?” I wonder if this contributes to depression in the elderly as it it did for the young Phuc, driving him to suicidal thoughts. The desire to be someone else as a youth can be seriously debilitating, and his message is to embrace what you are, and who you are. Accept the indicative, and still leverage the subjunctive to grow your creativity and passion for the future.