The smartphone has taken over the world.  According to the Pew institute, 77% of the U.S. Population have smartphones.  I wonder if in the near future we’ll simply drop the “smart” part of that, and the default will be phones with Internet and camera features.  Seems inevitable, and with it, the concept of task management seems to be ripe for innovation.

So with this, like all older institutions ( public education, church, government, etc.) we need to look at them with a fresh set of eyes and ask ourselves this – “If I were to build it today, how would I do it?”

I started LifeSparcs with the idea that a small memobook would be useful, and I still hold to the idea that writing things down helps you process them.  But the honest truth, my Gentle Reader, is that I vacillate between using the memobook and using computers to help me manage my tasks.  I’ve tried almost all of them and my favorite reminder/task management app above all of them is one called Due.

Before I get a head of myself, this is indeed a SparcCard, TC03 to be specific.  Thus, I’m not really saying you can’t get gains out of the other computer-based task management systems.  The SparcCard is called The Annoying Robot, since the advantage it has over the inanimate journal is that it’ll be up in your face every day if you let it.  The Due app is relentless in its reminder feature, allowing an easy push to an hour or even a day into the future. But the endless buzzing of my phone tells me that I’ve got stuff to do, and Due is letting me have it!  Usability is key, and the soft space between being annoying and being so annoying that I uninstall it was threaded well by the creators of Due App.

Google reminders seem, contrarily, to be too easily dismissed. It gives you one or two reminders and that’s it.  Google clearly doesn’t understand how much I need to be prodded into doing things. Apple is the same way.  I’ve got one task that I put into the Apple reminder feature and it never actually reminds me beyond the first time it did, three months ago.

The Due application is slick. Check it out below. The first screen is the backlog and the second screen shows the wonderful time management technique, unique to Due. It makes for a great, one-handed experience, critical since it’ll be annoying you.  A lot.  In a Good Way. Like Mom or Dad used to do. 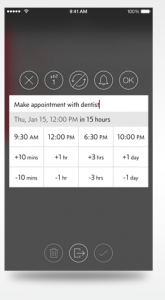 As with all things, it isn’t ultimately about the tool but the results.  Whatever app you pick, make sure its an annoying one, that will allow you to push the tasks into the near future. Otherwise you’ll never remember to review your backlog of reminders and it becomes yet another dead list.

What cool reminder apps have you used?