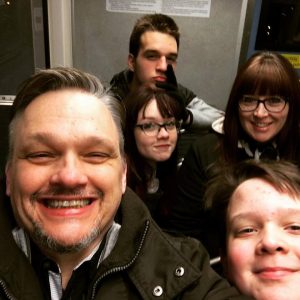 Teens Can Be Useful

I have one ex-teen, one teen, and one almost teen. I KNOW teen. Teen is the poster child for chaos. It teaches so much. It’s a class in complexity science, self-actualization, and patience.

Teens are undergoing an astonishing transformation, from the little one that you held in an arm easily to someone who’s asking for your car keys. I probably won’t recover or understand what’s happened fully until they’re all gone and I’m sitting on a park bench somewhere feeding pigeons.

What I learned so far is that it is not just the kids that need to transform during this time.  If parents are to retain sanity, they need to transform as well.  It’s tricky, since by the time they’re teens or tweens, you’ve been a parent for a while.  You got them through the scary childhood, where you were deathly afraid of their…well..death.  They can fend for themselves a bit now. You did it!

Yet the work isn’t yet done. Not by a long shot.  You realize this when your teen or tween turns away an affectionate kiss, or goes to their room angry for the first time.  Their rejection of you surprises you at first, you weep over old pictures, and then eventually you get to the math of the situation, e.g. they are fourteen and in four short years they have to be functional citizens. Then you (I) flip out and go into Boss Mode. We try to break it to the younger generations that life is tough, and you got to engage, to work, to have grit, to learn, and know the game.  Then folks like Simon Sinek come along and tell us we’ve basically ruined them all by giving them iPhones.  ( Parenting is GREEEEAAAT 🙂 )

In the midst of this complex journey of parenting teens, parents will have interesting moments, conversations where they challenge you, hopefully in the right way, with their ideas. One that sticks out to me today, the day after the 59th Grammy’s, is a semi-heated debate about Rap music I had with my two eldest children a few years back.

Understand that I am still, in general, not a fan of rap. I’m a Prog Rock guy ( RUSH! YES! KANSAS!). I presented my position to my children, that rap was misogynistic, drug-fuel, violence-encouraging trash. Harsh? I may have actually said those very words, because that has been my experience with it, and I’m not alone. After a few Google queries on ‘misogynistic rap’ I would post what I found but it’s simply too much horribleness to even link to. Do the research yourself. You’ve been warned.

Of course I know that many rockers have had this trait as well. My bands of choice did not, but that’s me. It seemed that rap was just so in your face about it, as this quote neatly sums up:

“But in hip-hop, the misogyny tends to be much more explicit, even if it is born of the same toxic mix of fragile male egos, accepted gender roles, double standards, and entitlement. It shouldn’t be news that rappers of the ’80s and ’90s could often be unapologetically misogynistic.” – STEREO WILLIAMS, The Daily Beast, 2015

It was this position that I espoused to my youngsters, and they pushed back, saying that things have changed and that all rap isn’t like that, etc. etc.  I set down a challenge – show me rap that isn’t awful crap. Show me.

And they did. I think I got Kendrick Lamar, Chance the Rapper, and select Kanye ( Ultralight Beams – smart kids), sent to me in Rhapsody links. I listened, then more, and I started getting it. Then the Grammy’s last year, Kendrick showed me the pains of Black america by coming out in chains. It was a powerful, shocking visual, highlighting for me how far we have to go, throwing dissonance into my world that had the election of Obama pegged as the symbolic end of Racism. With Kendrick I had to plow past all of the triggers that would have sent me on my way, so that I could understand what my kids were saying. For example, the album cover is threatening, as it shows a bunch of shirtless African Americans sitting on a dead white judge. It’s tough to get past that, but he does talk about it here, and I get it.

However, it was Chance that changed it all for me. His bold claim of the love of God and Christ, his insistence of an intense positivity, and his adoration of life are simply astonishing. In case you missed it, check it out here:

How Great/All We Got at the #Grammys w/ My Cousin Nicole, Kirk Franklin, Tamela Mann & Francis and The Lights

Now, Chance is also not an angel (who is?), having some drugs and stuff in his past, but he’s only 23. He just finished being a teenager himself, and I pray that he will be able to avoid the snares of drugs that take so many of our youth. I think he will. I hope he’s a harbinger of a new direction of rap – both real enough to be relevant and true, but positive enough to get a wide audience to the issues.

I learned all of this from my teenagers. They had a different angle than I did. My data was old. My models were wrong, or at least not totally right. I was open, just enough to see what they were telling me.

On occasion, I will actually try a new rapper.  Often I’m disappointed, but once in a while I get a nice song here and there. But there’s more to it than that. As readers might know I, like Chance, am a Christian. Indeed, I hold that Christianity is basically the only thing that can save us. Only in Christ can we love unconditionally. He has to show us how.

So finding Chance is a big deal for me. If an award-winning member of the rap community can preach hope and faith, so can I. Moreover, I can be open to their message, their pain. I can hear, like I heard my own children, of a different truth. There’s a future for the USA in a Chance the Rapper world.

What did I learn? Being open to those who have different viewpoints than you is a huge leg up. While holding onto what you believe, you can graft on the strength of another, and you get stronger, better, more adaptable. Staying open is key to wisdom and, by extension, happiness.