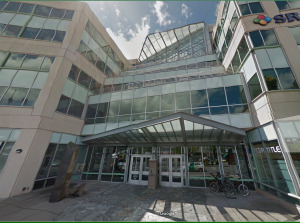 Recently, I attended an Agile training class in downtown Seattle, close to Lake Union.  For those not from the area, don’t fret – the actual location is irrelevant. What matters is the design of the space and how it makes you feel.

During a break, and then after the training was over, I took the opportunity to visit this building shown on the left.  I used to work there, and I was drawn to revisiting it for some reason, one that became evident the minute I walked in.

But let me step back.

About 15 years ago I worked at a company called WRQ. It was a software company that created terminal emulation software, and business was booming in the late 90’s because of the Y2K scare.   (Note to Millennials: Y2K was a time when people thought the apocalypse was coming because computers couldn’t handle the change of the millennia, that is when the clocks went from 1999 to 2000, because poor programs might have only two digits as years, and then 99 becomes 00, which is 1900.  Boom.  Yet, by nearly all accounts Y2K was a non-event, though HIGHLY profitable for software folks, especially cobalt developers. Cobalt was a language.  Google it.)

Anyway, I digress.  Check out this beauty. Click on the picture.  This is where I made the move to Senior Web Developer.  It was an exciting time when I started there.  It was 1999 and the Internet was hot, people were making millions, and the Y2K thing didn’t kill us all.  I had two young kids, and this new job, a house – the whole works.  So while the building faded into the background, it worked its way into my psyche and had a big impact.

The pictures really don’t capture the space effectively. WRQ had possessed the majority of the seven floors of this space. It was all ours.  Parties were done onsite and the owners were very family-friendly.  On the Fourth of July you be allowed to go onto the roof of the building and watch the fireworks right on Lake Union Street. WRQ sprung for a big gala at the Experience Music Project (EMP) when it was just opening. My daughter made mask, and my then toddler-aged first son ran through the hallways to trick or treat at each office, while my daughter visited with my friend Heather.  The Blue Angels practiced right outside our window. They let the whole company go to see the Matrix Reloaded. Later we lived through 9/11, where Cindy, my manager, was super supportive. We lived through a rare Seattle earthquake, where I found out how great it was to have a building on rollers.

Why do I tell you all this? Because it’s been challenging for me to separate out why this building meant so much to me and since this blog is dedicated to finding happiness and wisdom, I figured there was a bit of gold in this experience.

The central question was this:  Was it just the good times (and bad) that I associate with the place or was it the uniqueness of the space itself? Can a building really be so special that it can be missed, like an old friend?

I have come to the conclusion that it is the space and that Space Matters.  This might sound obvious, but when I say matters, I mean matters a great deal, with the potential to create strong emotions years later, a powerful feeling of happiness mixed with nostalgia. There’s power here. It does make sense that big events might cause a space to matter such as the birthplace of an important person, the site of some tragic event, and so on. We can feel the energy from spaces and objects, and my learning was that even a “regular” office space could be this for your life.

I have rejected the notion that it was that time in my life that made the space special.  Why? I have zero emotions for the first building I worked at, despite the fact that it was even a more exciting time.  My very first child, a five minute drive to work, and a killer Honda Accord V-6 that I leased (pro-tip: don’t lease).   Indeed, of all the office buildings I worked at over a 20 year span, the WRQ space stands above them all. Of course, I do not believe the feels are completely independent from the good times I had here.  It is indeed a confluence of events, yet that has to include an inspiring space.

Architecture building architecture can inspire a person it can make work wider it can create an amazing memory.  Christopher Alexander, a geek-famous architect, puts it well:

“I believe that all centers that appear in space – whether they originate in biology, in physical forces, in pure geometry, in color – are alike simply in that they all animate space. It is this animated space that has its functional effect upon the world, that determines the way things work, that governs the presence of harmony and life.”

I wonder if this is why the old Christian leaders would put so much work into their buildings, and why other faiths continue to do so. I lament the fact that Christendom has moved away from this, at least in my lifetime (though I see evidence of great architecture in the West returning, reference the Shard in London and the new World Trade Center in New York). Great buildings show respect for both the work undertaken within them and for the people doing that work. The architecture becomes part of the conversation, a quiet participant to the systems built within their walls.

What HappyWisdom Pro Tip can you take from this?  Very simple!  Pay attention to the spaces where you’re working in!  If you work at home, make sure your spaces is pleasant and special.  If you are choosing a job, ask about the facilities, especially if they’re substandard. Walk through your space, see if it resonates with you, as this gem did for me.  Remember – Space Matters!

Of course, nothing on Earth lasts forever.  WRQ was sold to a company that pushed together it and its primary competitor at the time, Attachmate (which caused layoffs that got me in the final round)), and that entity was subsequently gobbled up by Microfocus in 2014. Sadly, one of the founders and CEO, and the ‘W’ in WRQ, Doug Walker, passed away in 2015 in an avalanche. He was a man who was well ahead of his time as a CEO, offering nursing rooms, personal offices, and other perks that .Com’s take for granted now. The fifth floor, where I spent nearly four years, is deserted, waiting for some luck tenant.  But would it have the same magic? I have no idea, but something tells me it might not, since the space is shared with so many companies now.

The only remnant of WRQ that persists is in the Microfocus product names. I wonder if any of the code base remains from the 90s?  It’s unlikely but that’s not really important. Life on earth isn’t about permanence, its about how you make people feel when you’re together, and on this metric WRQ was an amazing success. I am unaware of what the other founders are up to, but I sincerely hope that they are doing well.  I’ll take this opportunity to thank them all for the chance to work in such a beautiful, inspiring place, and with amazing people.