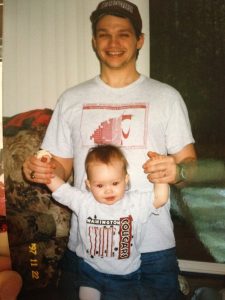 Gentlemen, it’s not easy what I’m about to tell you. I don’t have any solutions to the fact that our daughters are going to date, and in general, they’re going to date men. For those differently inclined I don’t mean to leave you out, but I must speak from experience, and in mine, it’s boys darkening my doorway in search of my baby girl.

I know, it’s hard to hear. I live in the West, so we don’t arrange our marriages. The wisdom of the arranged marriage approach is crystal clear to me now, but I’m guessing that’s not something we can retrofit into the culture.

So what are we to do?

I have only one daughter and she has been a delight. She wasn’t (and isn’t ) a super girly-girl. She didn’t dream of prince charming or have early crushes, being more about Pokemon than Princesses. As far as I knew, she wasn’t that into boys and didn’t really plan on dealing with them until after college.

That was the plan. I had time to adjust. So I thought.

When my baby girl turned fifteen it started. Boys were around, and before I knew it they were lining up like she was Penelope waiting for Odysseus to return. She repelled most advances, but then one got through.

Then another. And another.

Now I don’t want you to think I was unrealistic. I knew the day would come where my little girl would meet a boy and, after a careful vetting process, we’d all agree that the boy could proceed to date her. Then, through a series of control gates, we’d review the progress of the relationship, see if it’s worth continuing, have a Go/No Go decision, and sharpen our evaluation criteria for future suitors.

A completely rational plan that didn’t have a chance in hell of succeeding.

You see, it’s about random chance as much as anything.

Tip 1 — Do not allow for random chance

That’s right. You must structure her engagements so that the surrounding population of boys is either zero (aka all-girls school), gay, or from families so rich it doesn’t matter because even if they get divorced she’ll be set for life.

You see, as fathers, that’s what we’re all about. We want to keep our daughters clothed, fed, and, as Chris Rock put it, “off the pole”. He had visions of his daughter doing strip club routines on a dance pole. I have a vision of my daughter living under a bridge somewhere in downtown Seattle swatting flies off of a half-eaten bagel she found in a dumpster. I have a strong imagination.

There’s nothing there for you, Dad. An imagination of the future brings agita and gallons of Pepto Bismol. Even if the dude is Prince Charming (a two-dimensional cartoon), the idea that someone is even thinking about your daughter in that way should convince you to limit all thoughts of the future. Instead, dig out that box of photos or log into your cloud service you use, and watch time go by, frame by frame, picture after picture of when she wanted to be with you more than anyone else.

Tip 3. Try to go easy on the guilt trips

In today’s connected reality we get to stay in touch (bother) our daughters 24×7. This isn’t a terrible idea since obviously, it’s the internet’s fault that your daughter is dating this person. I mean, he’s texting her day and night — no wonder she can’t get a minute to think, to break free of his clutches, the evil spell he’s got her under. So, Dads, text away! However, let’s go over some examples of good and bad texting:

Do: “It’ll be great to see you when you get home”

Don’t: “Daughter, I know this is kind of random, but I wanted you to know that if something ever happened to me you can have my laptop and all my Wired magazines.”

Do: ”It’ll be great to see you when you get home.”

Don’t: “Little girl, have we ever done a background check on <insert suitors name here> ?”

Do: “It’ll be great to see you when you get home.”

Don’t: “Here’s a pic of when we were at Great Wolf Lodge. Remember when you used to like hanging out with me?”

That brings me to the next tip. You see, through a terrible depression of wages and a ridiculous increase in the cost of houses and college, the Millennials and Zers are generally broke. Heck, Gen Xers are broke too, but we have great credit! So break out that plastic and treat your little one to something real nice. Think big here, Dad…

Tip 4: Buy a ticket to a foreign country for her “spirit journey”.

You might think this a bad idea, because who knows what she’ll drag home from Bangladesh or Sri Lanka? But you know what? Your luck hasn’t been all that great having her meet boys at the local Starbucks, so what do you have to lose? Especially if it’s a one-way ticket. Just kidding. Mostly.

You will, of course, try to convince her that this is not the same, that you followed the rigorous aforementioned gated review process with your future father-in-law. It was all pre-approved, baked in, and certified “good for humanity” before anything progressed. At least in your mind, it was.  It’s all for naught, dear fathers. Your baby won’t listen, and she’ll stick to that boy like flypaper.

Tip 5 — Develop a nervous tick or a medical condition

Dad, there will be touching. Kissing even. There’s no preparing you for this in advance and there’s no appropriate response. You just have to experience it, along with an accompanying nervous tick and hives.

I am told eventually it becomes natural, but until then, I’ve developed a helpful digestion issue that causes me to run at some velocity to the bathroom. You could leverage a spoon and gouge your eyes out, but that’s a bit dramatic. In the age of cellphones, there are options like having your cell phone call you at random intervals. There’s an app for that.

Tip 6 — Chase two rabbits and they both get away

This is the most important tip of all.

You try to both pursue to advance your relationship with your daughter AND chase every suitor away, you’ll accomplish neither. So don’t be a fool. You’re her Dad, and this is one position that cannot be challenged. She can have 1-n number of boys and even husbands in her life — but only one dad. You sit on a seat that no one else can, you alone have the Iron Throne, and you cannot be usurped.

It is, unfortunately, true that you’re more of a figurehead now. However, your daughter will eventually seek you out when she’s exhausted the (stupid) ideas and/or capabilities of her mate. When they have trouble installing that garbage disposal, or when their computer doesn’t boot, or when they need to complain about the boy to someone, you’re there. You’ve got her back, always, through everything. Bonus points: eventually the boy will even come to appreciate your help (I sure did!).

Hopefully, you’ve retained some common interests. Is it fishing? Video games? Camping? Mine is geekdom, particularly around conferences like ComicCon or PAX. We’re huge nerds in this space, and it’s completely authentic.

Whatever it is, keep it. Feed the link between you and her and be nice to the boy, as nice as you can. You don’t want to lose her completely and she doesn’t want to lose you either. It’s the way of the world, this mating thing, and we are simply screaming into the wind when we protest.

Keep your thing with her, and when your little girl comes back, she may be accompanied by smaller versions of herself called grandkids. Grandparents report a high level of happiness and satisfaction from these small humans. Will it be enough to set back the clock, to re-balance the scales after losing your baby girl? I don’t know; only time will tell.

I imagine that this topic will arise again when my granddaughters come of age. Then the question will morph into something like “how can we prevent our granddaughter from dating?”

The ultimate irony will be that both your daughter and your son-in-law will be asking that same question with you.