Note: this post seems to be getting a ton of spam, so I flipped the title around just to see if that helps.

Gentle Reader, I’ll be honest – it took me a few hours after Superbowl 51 to recover. I had to work to use the pent-up energy, which was good, then I watched the latest Expanse, which was good as well. But my mind couldn’t forget the experience I had just had. Friends and family had come over and it was a great time through and through.

I am lifelong fan of football, and though the Steelers are my team, the Patriots are in my top five because they’re a Northeastern, cold-weather franchise that practiced excellence during my formative years. Sometimes I wonder if all the big decisions you make you make when you’re ten-years-old.

Anyway, I pay attention when things make me happy, especially that pure joy that brings you back to that ten-year-old self.  Here’s why I think that this game really mattered in a life-affirming way, and why we should take note of the lessons it contained.

1. Never Give Up – Obvious, the first tip would be – its never ever over!  I mean, the Patriots looked bad for three quarters. It was 28-3.  They missed an extra point.

2. Be emotional, but don’t lose your cool – This picture is from tonight’s Superbowl: 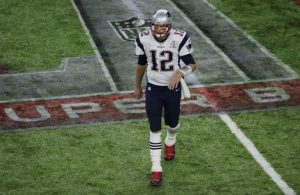 New England Patriots’ Tom Brady walks off the field during the first half of the NFL Super Bowl 51 football game against the Atlanta Falcons, Sunday, Feb. 5, 2017, in Houston. (AP Photo/Charlie Riedel)

It shows a dejected Brady, but not a beaten one.  I couldn’t find more photo evidence of it online yet, but as I watched the Pats play, I didn’t see panic in their eyes. I didn’t see people Beckam’s infamous net kicking, or a tantrum like Cam Newton’s.  Look, I know that Brady hasn’t always shown this sort of grace, but on this night he did, as did his team. The defense had to have been dejected, but they stayed in. The receivers dropped a bunch of passes – they stuck it out. Brady threw and interception, the running back fumbled, etc.  They showed more than grace under pressure. They showed a stubbornness to not give into their own inner critics. It must have been really easy for those men to start hearing the negative, internal voice that we all have.  I’m not really good. We didn’t belong here. We’re not as good. I cost us the game.  Who hasn’t felt the impostor syndrome, and given it space to thrive in your mind.  Tell it no.  Tell it that you’re going to keep playing until the clock runs out.  Keep playing.

3. Leave It On the Field –  The two teams played their hearts out, but that’s not who I’m referring to with this one. I’m talking about Lady GaGa, who basically warped time and space to give us an hour long performance in fifteen minutes. It was quite astonishing, and I worry about future performers now.  How does one top that show? But again, watching her perform, she threw herself into every move, every note, every leap from one platform to another. When she sat down at the piano, she could hardly breathe, but she sang beautifully despite that. She flew, she caught footballs, she kept it respectful and yet had a lot of hear.  It was 100 percent GaGa the whole time.  What if I could put the same passion she showed into my vocation? What would that even look like?

4. Complexity Rules Everything – You see, ironically it snowed in the Puget sound during this game, and I love it for the same reason: unpredictability.  I love it when the smug experts are wrong, like during the big storm this year (that never happened) and when they consistently fail to predict snow in this region. Now, while the Pats were favored, if you looked at the probability and statistics of them coming back from a twenty-point deficit, I’m certain the odds would be infinitesimal. But no one could tell you the score, no one could predict what happened because life is complex.  We had a similar thing happen in our election, making pollsters look like fools.

So when you see some expert spouting off about how your venture or plan isn’t going to work, forget it.  Authors face this all the time – you won’t make any money on your book, you can’t write in the genre, e-publishing can’t make you money, etc.  Its okay to consult the data guys when formulating a plan, but once the game starts, lock them in the closet.

I’ll leave it there, for now, but don’t be surprised if this SB51 comes up again. It was a joy to watch and I’m super grateful for it.

What did you get out of this Superbowl? Was this the best ever? Let me know below!